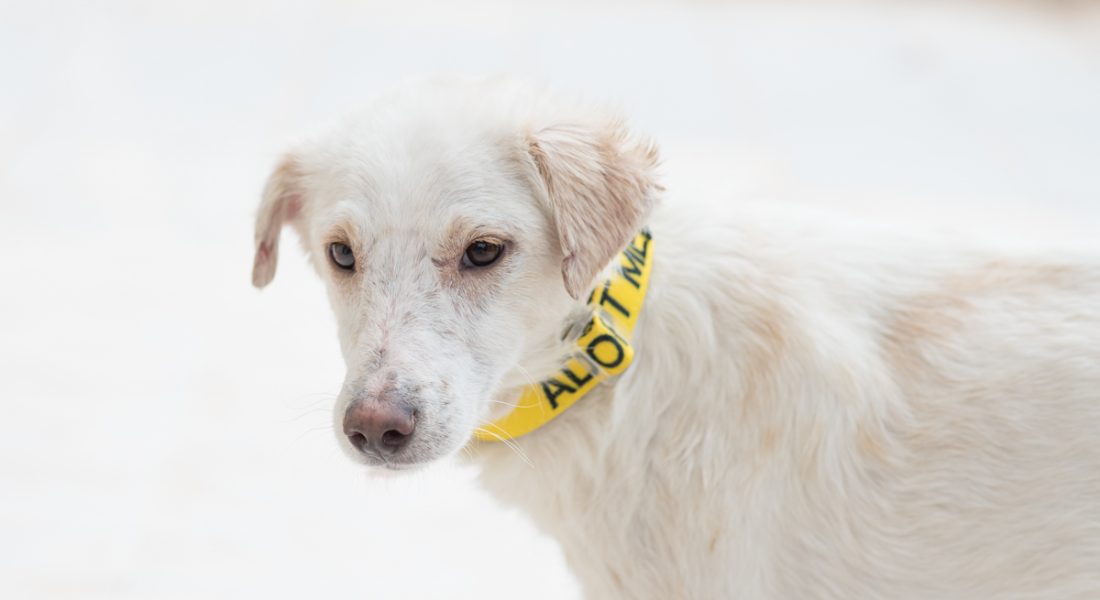 Sami aka HQ Dog is now looking forward to the next stage of his life, a home to call his own. If ever a dog deserved a bright future it is this one, four months ago he was in a situation where he would probably have preferred to not have a life – this is his story.

13th Mar 18 UPDATE! Sami has a new forever home right here in Kalkan from April. One of our long time supporters is making a permanent move to the town and will be adopting Sami. This is brilliant news for him as Kakan is familiar to him and he will continue to see the people he has made his recovery with. Thank you to Michelle, from all of us, for giving this amazing boy his second chance.

Sami had been seen on the outskirts of Kalkan previously, but no one could get near him, and his increasingly poor condition had led to concern. He really did look very poorly and would have been driven away from people, shouted at and made to feel unwanted as well as being very poorly and very hungry. Eventually in late November 2017, he was spotted in Kalkan and several people tried to catch him but he was so terrified he bit them and ran off. He was caught with the help of a catch pole and Hasan, the vet, came rushing out to sedate him and take him to the clinic for blood tests, and general health check up, including x-rays on a suspected dislocated leg. 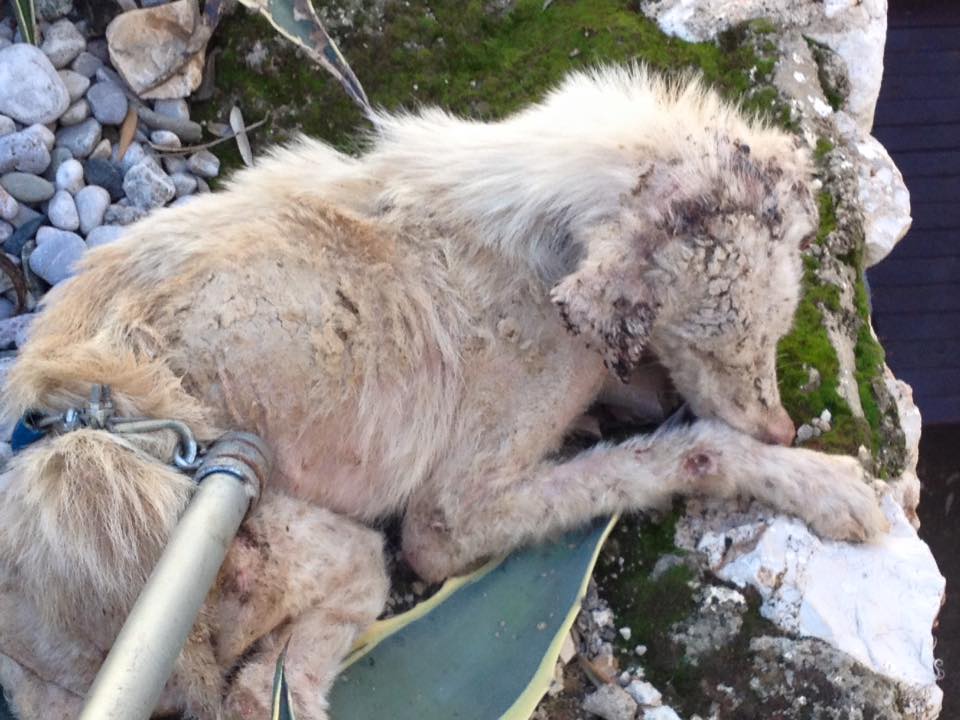 X-rays showed no breaks or dislocations but that was the only good bit of news at this stage. Tests showed he had mange and ehrlichia which accounted for his terrible skin condition and thinness, as well as leishmania. He was also terrified of people so plans had to be made on where to keep him and how to treat him. The outlook was pretty poor, no one quite sure he would make it through the next few days – all his conditions were treatable, but was he already too poorly to respond to them. He weighed just 6.5kg, seriously malnourished, so had almost no muscle condition and very little fur left thanks to the skin condition.

It was decided he would initially be looked after in a large cage at KAPSA HQ, where experienced volunteers could look after him, start his treatments and feed him. As a street dog and one that was terrified of people, this was a tough decision to make, he could have reacted very badly to it. 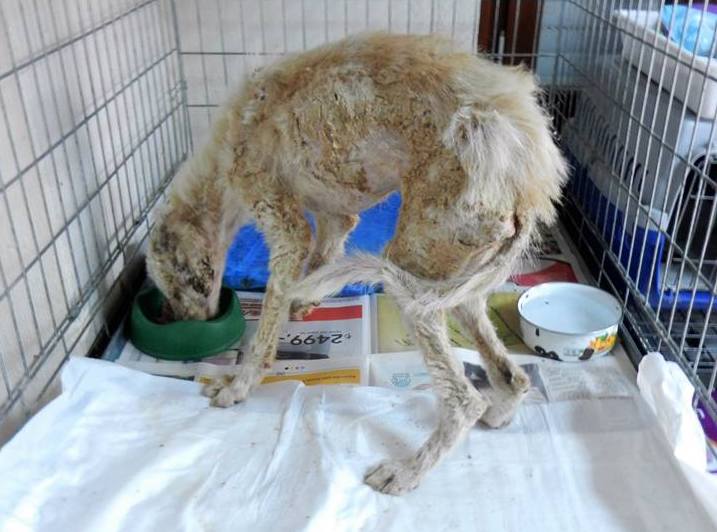 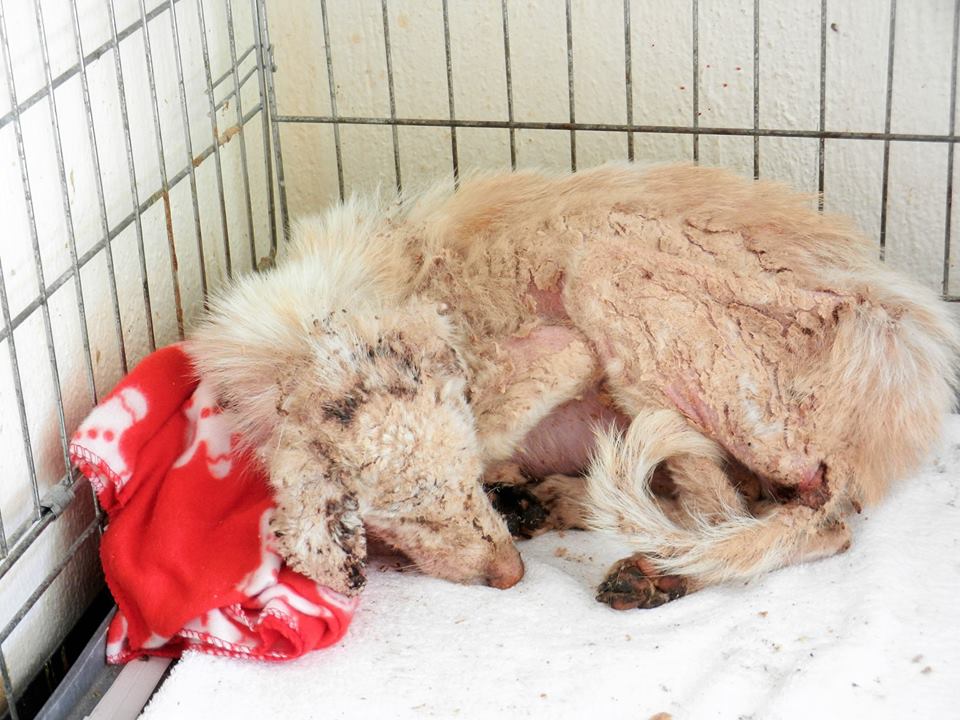 The first few days were simply a case of keeping quiet and calm around him, not touching him at all, just letting him rest and providing him with his medication and food – he definitely loved his food, he had obviously not seen much of that for many months, and his eating, drinking and toileting were all good, which was the best that could be hoped for at that stage and at least showed he stood a chance. By day 5, he allowed his carers to stroke him a little and even clean his eyes gently, which were virtually closed from the infected skin around them. He was also walking round his cage a little, using his pad to toilet on, another good sign as he had virtually no muscle tone and was very weak.

Slowly, over days and weeks, his conditions started to improve. The terrible scabs started to fall off, revealing clean pink skin beneath; his muscles grew a little stronger; he learned to trust people again and a rota was established with a team of volunteers who were feeding, cleaning and treating him. By late December he was allowed out of his cage and was having short walks round the office and even out into the warm sunshine in the garden. Even those not involved in his daily treatment would arrive with home-cooked food for him and he was slowly gaining weight, strength and confidence. 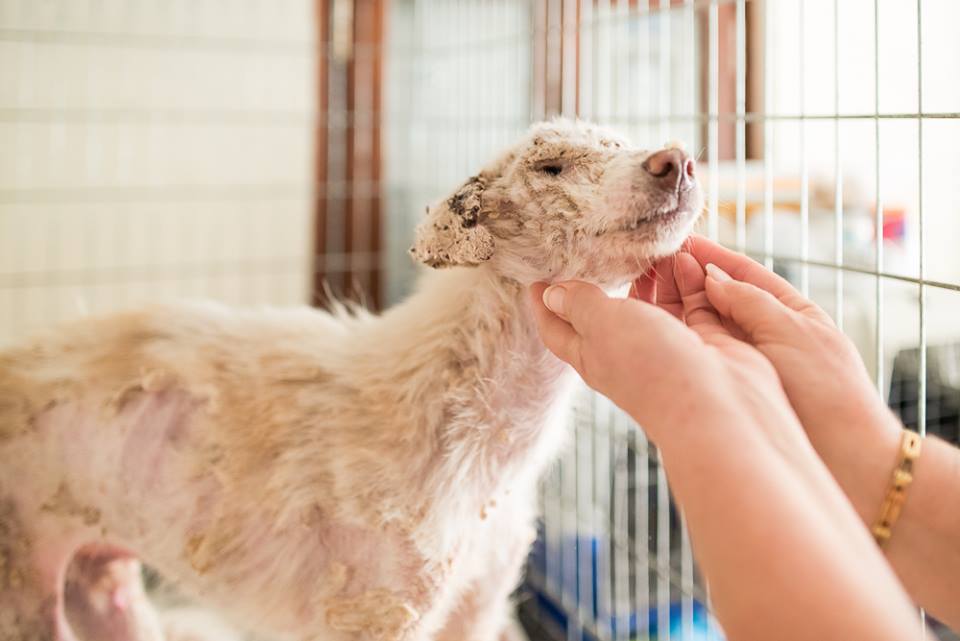 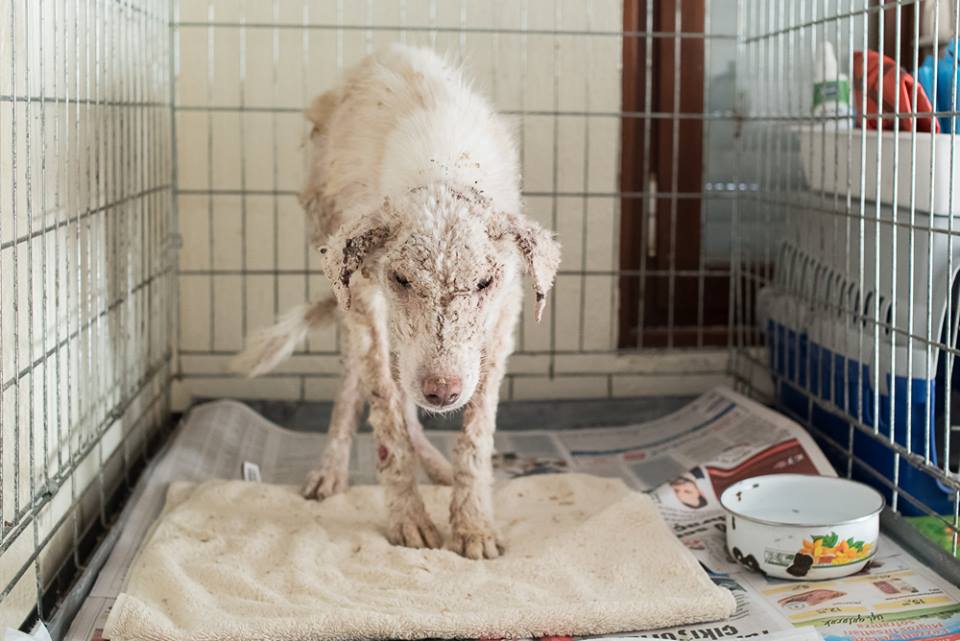 The vets Hasan and Lokman were checking on him regularly and progress was good, he wasn’t out of the woods but definitely moving in the right direction. Kind supporters donated a lovely coat for him and he loved the new bed he was given. He was rather less keen on his ‘Christmas present’, a bath, but with so much of the dead skin gone it was definitely time. 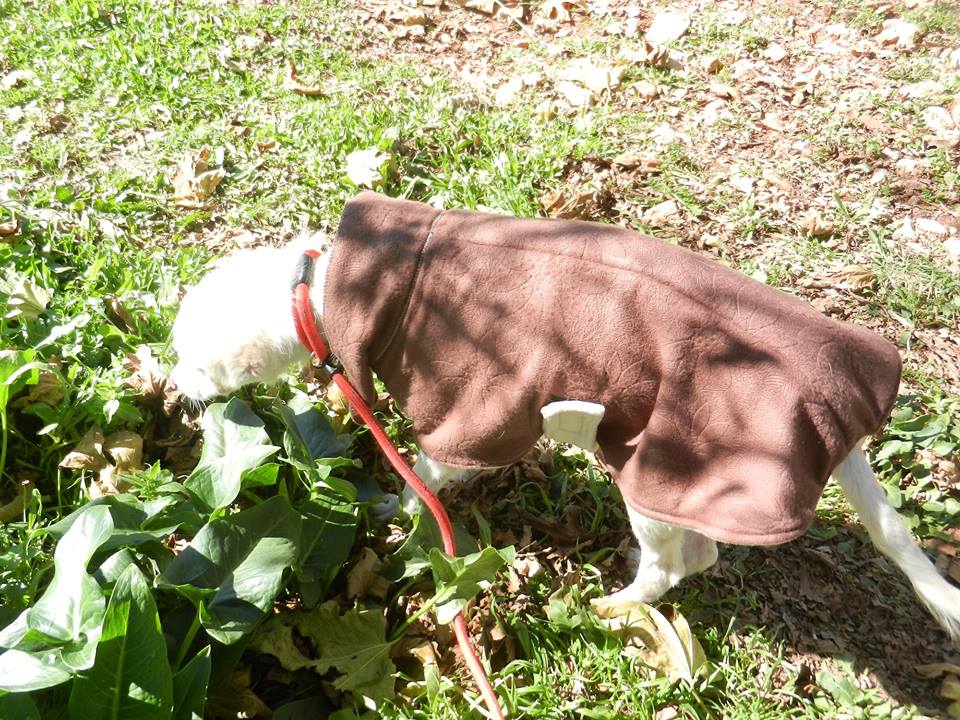 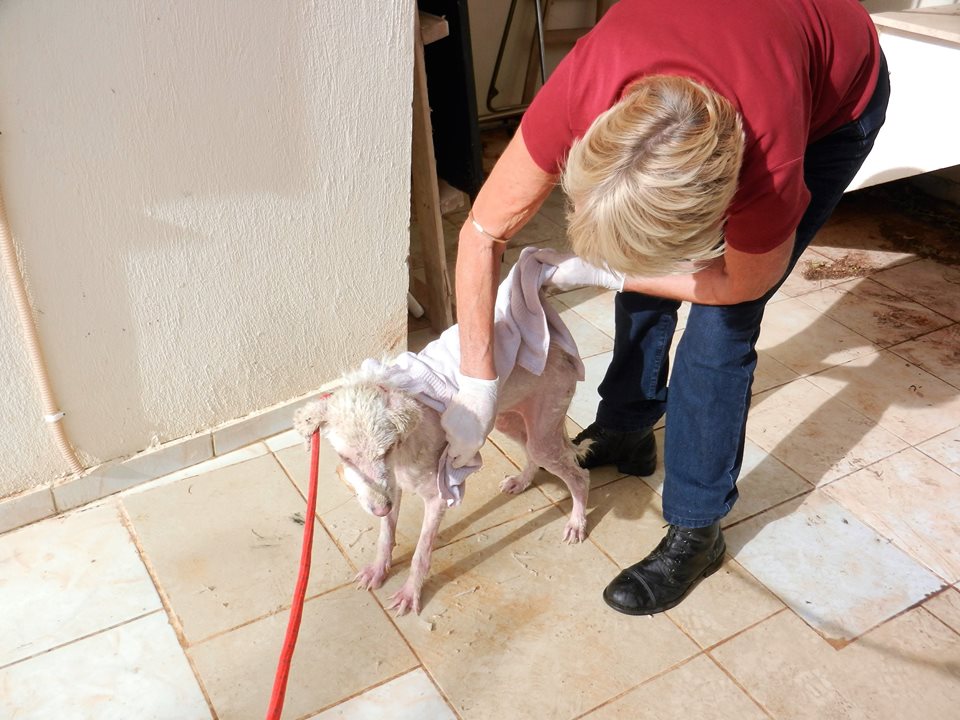 Through January he continued to improve, gaining weight and his fur started to grow back, a very good looking dog was starting to emerge. There were a few worrying days, a few infections that put him off his food, but his team of carers knew him so well by this point that any issues were quickly spotted and treatment from the vet was both quick and effective. Anaemia was added to his list of problems but treatment for that also started quickly. He was gaining strength daily and taking longer walks each day. More and more people visited him as word spread and he was very much enjoying the attention and new-found popularity, his tail never stopped wagging. He was also meeting other dogs and cats, both in HQ and on his walks and getting on with both.

By February the vet had great news, he was fully recovered from ehrlichia and his mange needed no more treatment. Treatment continued for the leishmania and anaemia, but the best news was he now weighed 10.5kgs! A huge improvement and well on his way to a good weight for a dog of his size. 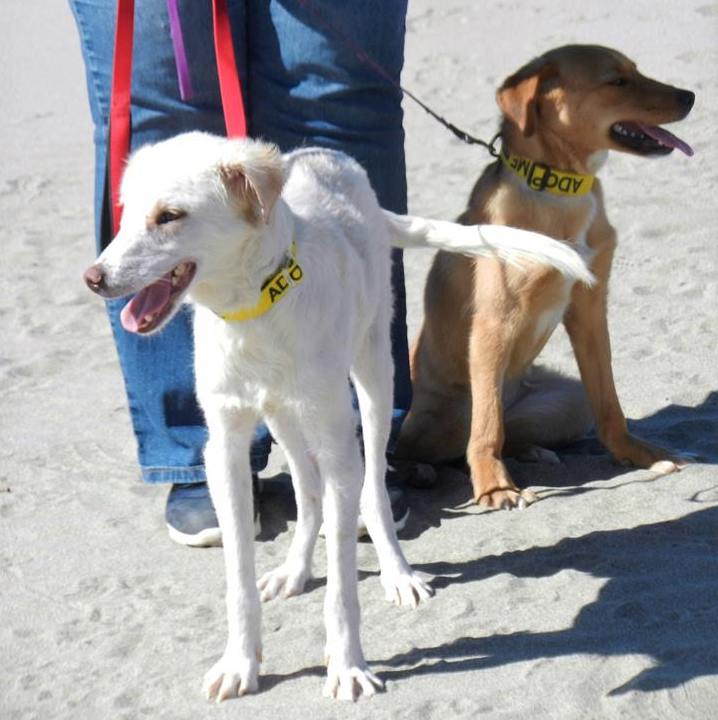 His recovery has continued through February and he has even enjoyed days out at Patara beach with his current best friend, a 5mth old puppy Penny who is also living at HQ at the moment while surgery on her leg heals. He now looks like a proper dog again and a very handsome one at that! He is bright and alert, very much enjoys attention and keeps an eye on all the comings and goings at HQ. 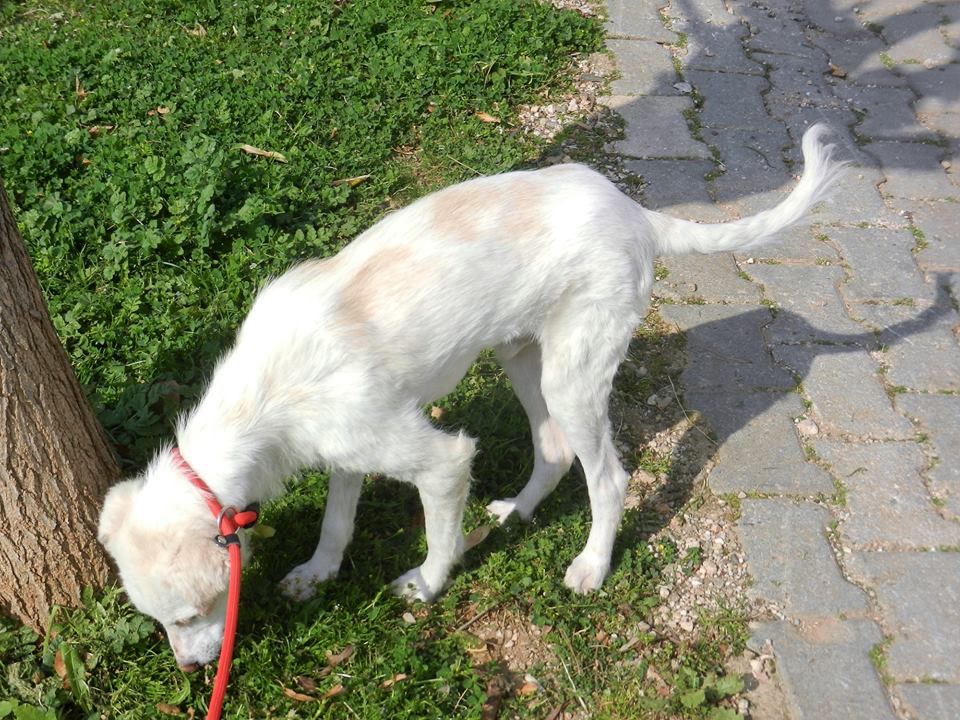 So here we are in March and at a stage we were not sure would come – he is ready to find a forever home. He can be adopted in Turkey or abroad, but any prospective home must be aware that his leishmania treatment will need to continue for now.

The vet has put his age at about 2 years old, so has finished growing and is on the slightly small side of medium. He has been neutered and has had rabies and mixed vaccinations. He is friendly and happy with other dogs and cats, and loves people, always desperate to please. He is also toilet trained and walks well on a lead and is getting used to car travel, so already well on the way to being a good pet.

Sami has come an unbelievable way in just a few short months, the odds he has battled against looked almost insurmountable in those first few days, but here he is. A lot of people have worked incredibly hard to help him get here and now the icing on the cake for them as well as him would be knowing he has a loving home to go to and a happy, bright future ahead.

If you think you can offer Sami that future, please use our Contact Page to get in touch by email. 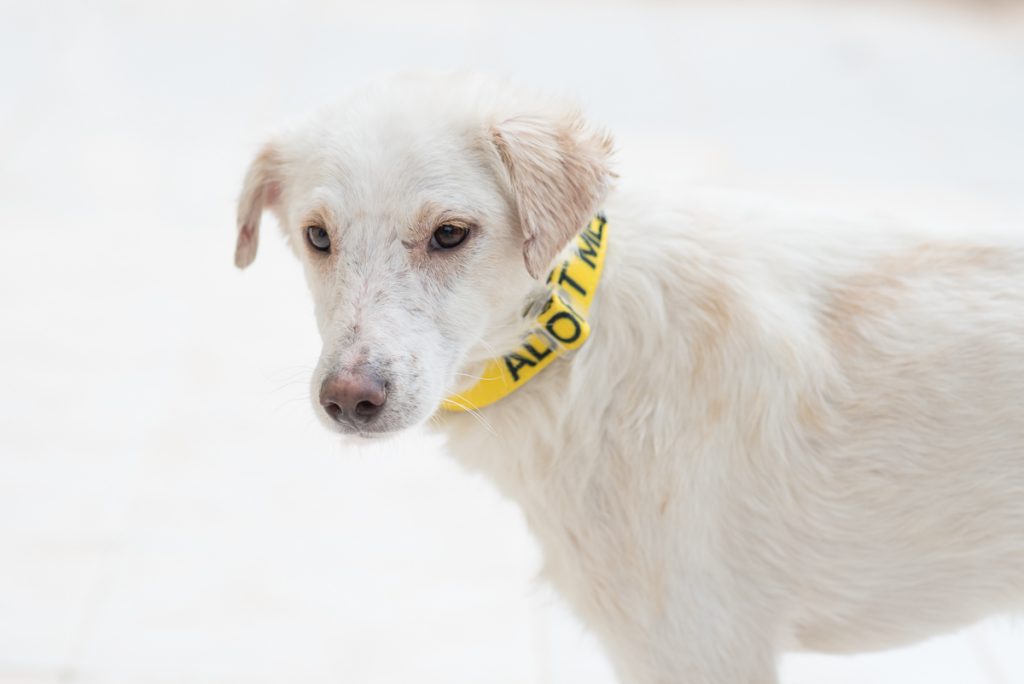 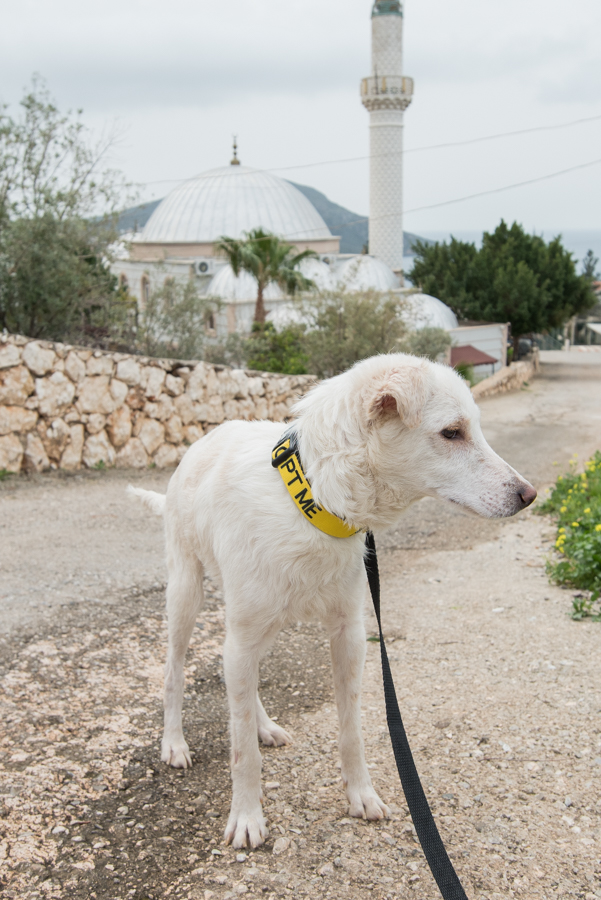